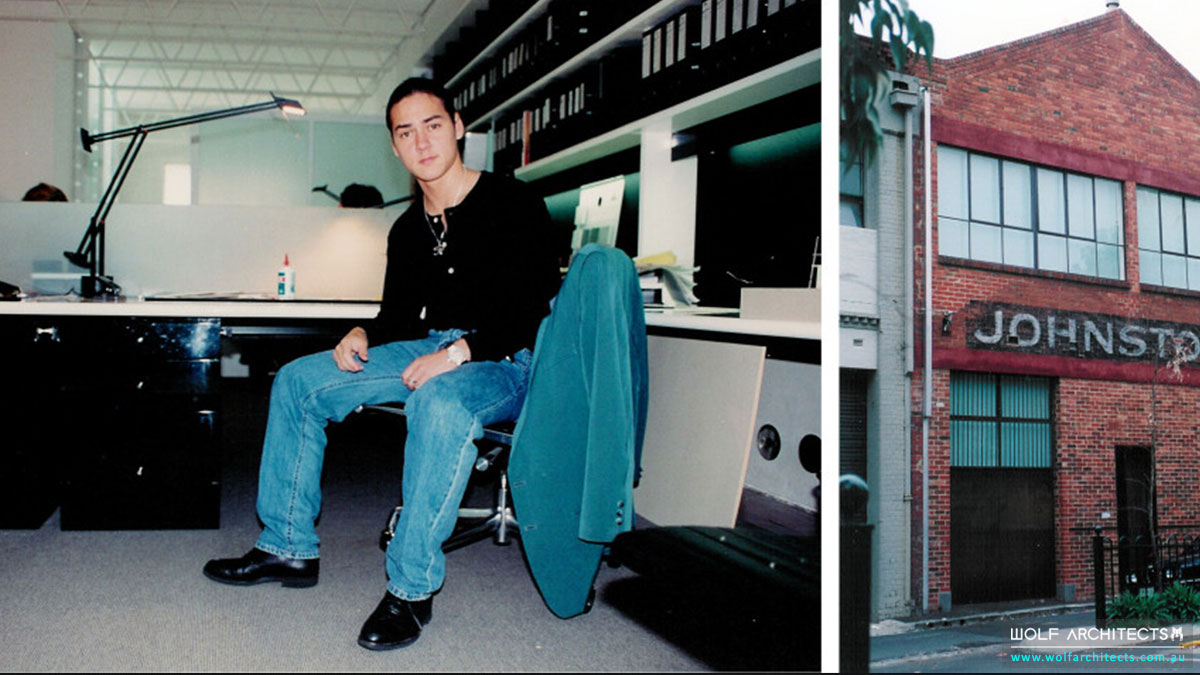 (Left)- Taras Wolf at his desk working under the guidance and mentor-ship of Karl Fender. (Right)- Within this unassuming warehouse building was an architectural masterpiece that was the office of NFA (Nation Fender Architects)

We cannot take credit for our achievements without acknowledging the help we’ve had along the way. Taras grew up during a property boom in Thailand during the 1980s with his family in the property and construction industry. Both parents had a keen eye and appreciation for design which naturally filtered into Taras’ veins. His Father was a great visionary with the ability to look at a vacant block of land and see its full potential years ahead of its time. Further to this he was a perfectionist with a great eye for luxury detail and placed great demand on all those around him. Young Taras would not escape such high expectations to always be better. His father’s relentless pursuit of bigger and better things, though burdening for Taras as the eldest child, ultimately imprinted a set of standards that helps today to set Wolf Architects in a class of its own.

Along the journey to becoming an architect Taras has also seen many other great teachers and mentors that still remain very close to heart to this day. In 1993 Taras worked for renowned international architect Karl Fender of Fender Katsilidis. At the time Karl was already a well established Architect with an illustrious career that began in the offices of iconic and influential Australian Architect Robin Boyd. While Karl now runs one of Melbourne’s largest a practices with over 100 staff he comes from an era of old school of architecture that appreciates what it means to be a craftsman. In 1993, however Karl’s practice was still relatively boutique with a significantly smaller team. They were not hiring and Taras had to create the opportunity to join the practice by showing up unannounced with one of his perfectly built models. Karl recognized the quality of Taras’ work and saw his skills as being valuable to the practice then called Nation Fender Architects.

It was from this period under Karl Fender’s mentor-ship that he developed his mastery of fine detail. While Taras did work with other architects in his youth he considers Karl and his time at NFA to be the most influential to his practice. Karl remains a good friend and mentor till this day.

Click here to read more on Karl’s recent visit to the Wolf house.